Designed with the Latest Green WLAN Technology
With the latest green WLAN technology, the 3G-6200nL V2 is able to dynamically adjust its power supply according to the amount of network activity. By supplying only the amount of power needed, this router allows for high networking performance while maintaining minimum power consumption.

150Mbps Max. Wi-Fi Speed
This Edimax wireless router is a high-speed solution that complies with IEEE 802.11b/g/n standards. The latest wireless MIMO (multiple-input and multiple-output) technology is built into this router to broaden its Wi-Fi coverage and to eliminate dead spots within the signal range. When it is connected to IEEE 802.11n wireless devices, this Edimax wireless router can reach Wi-Fi speeds of up to 150Mbps.

WPS Button
The Wi-Fi Protected Setup (WPS) button on this Edimax router allows for simple, push-button device connection. Simply push the WPS button on this router and on a client device, and you can establish a secure Wi-Fi connection between the two devices instantly. 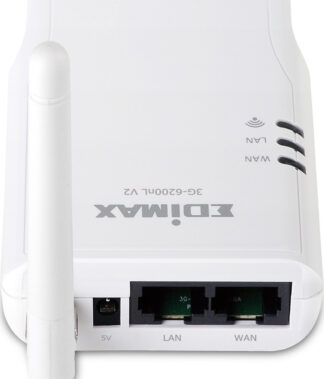